Tonight before going to bed I will share few words about the difference between arrogance and confidence. There is a fine line between these two but often time we blur it. Satan was fallen from the heaven because he refused to obey God due to his pride of being made of fire (in comparison to Adam who was made out of dirt). And ever since then all human being, society and culture, whenever reached the highest level of haughtiness and pride ,ended up in disaster. Just check the history of some people/civilizations/nations who were once reigning but their good times were ceased due to arrogance and evil doing.  I see a pattern in some people. When they show frequent arrogance, I sense their upcoming downfall. And indeed it does happen, every time, without any fail.

But confidence is something else. The self-assurance that we have certain good qualities and we can achieve certain goals if we work hard for it- is in fact vital in a person’s self-development. .”I believe I can do it” is a staple positive attitude towards life that can turn a nobody into somebody within no-times. Arrogance is when instead of being grateful people put their self-entitlement and pride on display. It is a bad thing when they try to use that arrogance to be condescending to others. Some people constantly do that and pass that on as their “confidence”. Arrogance is not confidence. One is from hell and the other takes you to heaven.

My mom always says, “Don’t say I am proud that I am doing this.. rather say, I am grateful that I am getting to do this.” Even changing the words when we speak can help us change our attitude. Let’s keep our feet on the ground and eyes on the prize. 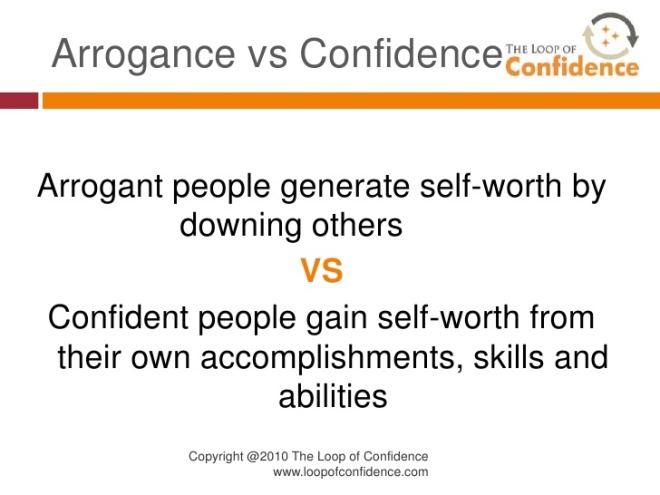